When a client wants flexibility, we give it to them!

The brief was that the client wanted FABwalls, but they needed to be able to be adjusted to different angles...So that’s what they got.We built the FABwalls, added some hinges and feet, and they got exactly what they were after. Better still, they were delighted with the outcome!It seems that there are no challenges too great for FABframe. 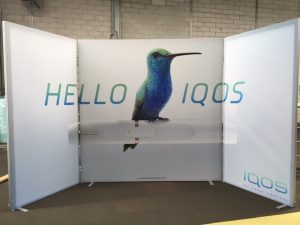 Whether it’s the Big Bash League or a One Day International, we have to make sure the sponsors are seen.And FABframe did just the job this season, with signage framing the scoreboard – the perfect place to make sure you’re seen.
And the tennis!

This centre court scrolling signage at Ken Rosewall arena made sure the sponsors were seen from every angle, whether it was during play or at rest.At the Coopers Beer Garden at the Australian Open, the FABframe lightbox, suspended cube and LED sign all set the scene for a relaxing drink at the tennis.

Creating the backdrop for Rogue One: A Star Wars Story

When you’re tasked with building the media wall for the World Premiere of a movie in the Star Wars franchise, it better be great because the whole world will be watching.

This media wall for the Rogue One premiere was 11m long x 2.4 m high – just long enough for all the celebs walking the red carpet, making sure that every step was the perfect photo opportunity.